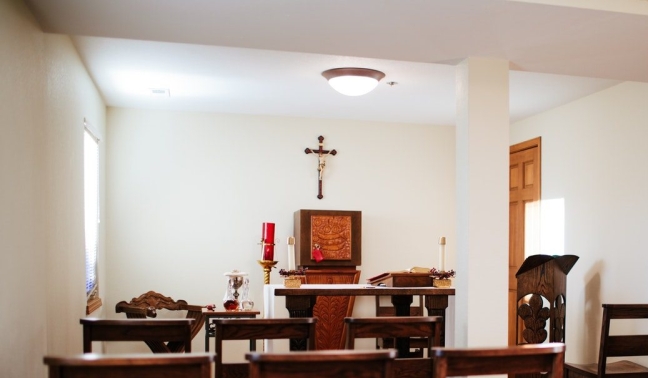 As we continue through the Lenten season, pray with me that our hearts are renewed and spirits refreshed.  It is easy to become complacent and fall lapse to the beautiful tradition that our Mass is – the continuance of  that Holy Sacrifice Jesus shared with his 12 Apostles so long ago.  But that miracle didn’t end on that holy night –  that Holy Sacrifice occurs now; that miracle of Christ’s gift in the appearance of bread and wine is celebrated everyday of our lives and we are blessed to have the opportunity to share in it.

As I said, it is easy to become complacent which is why I’ve decided to study the Passion a little more in depth during Lent.  I found on line the reflections/meditations of Blessed Elizabeth Anne Emmerich who was able to have her visions recorded on paper.  I have been reading this past week her visions on the Last Supper.  The depth of detail that she shares through her visions has sparked that spirit of renewal in my love and appreciation of the Holy Sacrifice of the Mass.  Her visions offer a chance to reflect and meditate on what occurred that Holy Night when Christ offered to His apostles His Sacred Body and Blood to be shared not only with them but with all who believe.  I will share with you some of what I read (from her vision(s)) this morning…

I then saw Jesus anoint Peter and John, on whose hands he had already poured the water which had flowed on his own, and to whom he had given to drink out of the chalice. Then he laid his hands on their shoulders and heads, while they, on their part, joined their hands and crossed their thumbs, bowing down profoundly before him—I am not sure whether they did not even kneel. He anointed the thumb and fore-finger of each of their hands, and marked a cross on their heads with Chrism. He said also that this would remain with them unto the end of the world.

James the Less, Andrew, James the Greater, and Bartholomew, were also consecrated. I saw likewise that on Peter’s bosom he crossed a sort of stole worn round the neck, whilst on the others he simply placed it crosswise, from the right shoulder to the left side. I do not know whether this was done at the time of the institution of the Blessed Sacrament, or only for the anointing.

I understood that Jesus communicated to them by this unction something essential and supernatural, beyond my power to describe. He told them that when they should have received the Holy Spirit they were to consecrate the bread and wine, and anoint the other Apostles. It was made known to me then that, on the day of Pentecost, Peter and John imposed their hands upon the other Apostles, and a week later  upon several of the disciples. After the Resurrection, John gave the Adorable Sacrament for the first time to the Blessed Virgin. This event was solemnised as a festival among the Apostles. It is a festival no longer kept in the Church on earth, but I see it celebrated in the Church triumphant. For the first few days after Pentecost I saw only Peter and John consecrate the Blessed Eucharist, but after that the others also consecrated.

Our Lord next proceeded to bless fire in a brass vessel and care was taken that it should not go out, but it was kept near the spot where the Blessed Sacrament had been deposited, in one division of the ancient Paschal hearth, and fire was always taken from it when needed for spiritual purposes.

The next time you go to Church, just think about some of the traditions we have that Blessed Emmerich describes above.

Do something great for our Lord today – take time to think about the goals you made for this Lent and renew your spirit to stay on track.

God’s will, not mine, be done.

Be not afraid; just have faith.

Jesus, I trust in You.

He must increase; I must decrease.

I've added another blog to the website...head to www.stmmmenofprayer.com and take a look.